Shortly after, first QRS flyer is released and placed in local hobby stores.  In May, the first ever launch occurred at the Chambers Flat launch site (LA1) which had a ceiling of 2,000 ft. There was a wide variety of flights including a model Space Shuttle, gliders, a rotor recovery rocket, Micro V2, water rockets and clusters.

By July, after launching at an initial Waterford site and the corn field adjacent LA2, the club obtained a more permanent launch site (the current LA2) at Cedar Gove and secured a CASA instrument to launch to 5,000ft.  This was a pivotal achievement as it allowed the introduction of rockets with medium and high power motors. 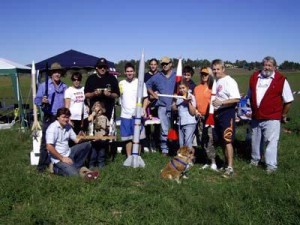 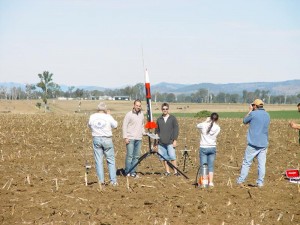 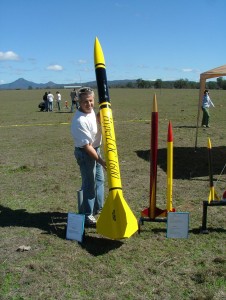 By the end of the year, a logo had been developed, the QRS web site was online and the first QRS display had been conducted outside the Hobby One store. A record 50 people had signed the attendance sheet at a launch in November and 120 people attended the first advertised launch in December.   Membership had grown to over 30 rocketeers. 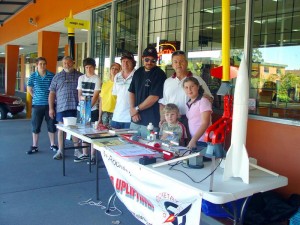 In 2008, the QRS became incorporated, public liability insurance was introduced and approval for launching rockets from Queensland Department of Mines and Energy was gained.  The club also acquired a broad variety of launch infrastructure and equipment, the Australian Rocketry Forum was launched and the importation of AP motors into Australia was introduced.

QRS sought and was granted association with the US based Tripoli Rocketry Association Inc. (TRA).  QRS Inc. was recognised as Tripoli prefecture #131 with Brian Dixon as the first prefect.  This was a great step forward as it allowed our members access to their three level High Power Rocketry (HPR) certification process.  It also allowed the members to attend and launch rockets at TRA launch events in the USA.

Blake Nikolic was granted life membership to QRS in recognition for his contributions to QRS and Australian rocketry.

The program of tri-annual advertised public launches commenced – these involved media advertising of specific launch events and welcoming the public to the site to view proceedings.  These proved to be fantastic channels for displaying the wonders and excitement of rocketry to the public.

Merchandise, including tee shirts and cloth achievement badges, was made available to members.

In March 2009, the club conducted its first ever Range Safety Officer (RSO) / Launch Control Officer (LCO) course with a number of QRS Inc. members attending.  In June, QRS Inc. was awarded a Queensland Government Gambling Community Benefit Fund grant.  A number of purchases were made for the club, most notably: a new enclosed trailer (7ft x 5ft x 5ft, with two opening sides and two rear doors) and a complete launch control system that would fire all motors including hybrids.

This year also saw the first of many QRS Inc. segments in the media on the Great South East TV program. 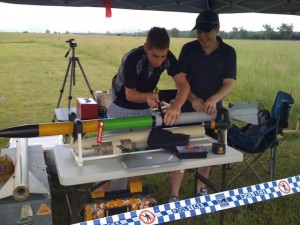 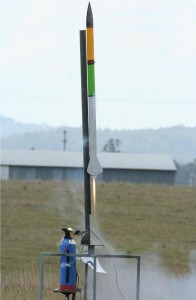 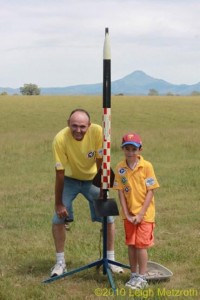 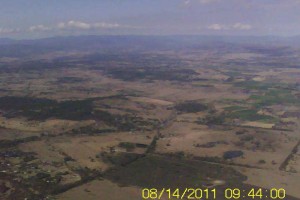 Aerial view of the Jimboomba site from 3,600ft

In 2010, three QRS members achieved their TRA HPR Level 3 certification. The first was Blake Nikolic flying his Elle3 rocket in Victoria on an M1297 to 13,134ft in May. He was quickly followed by Ari Piirainen with his Intimidator IV and Simon Liebke with his Hyperloc 1600 in June at the Williams launch site in Western Australia.

The QRS Inc. and other national partners co-sponsored the inaugural Australian Youth Rocketry Challenge (AYRC) conducted at the club’s Cedar Grove launch facility.  A crowd of over 250 turned out on 28th August, which was a brilliant South East Queensland day to witness 12 school teams compete in a cloudless sky for the Inaugural Australian Youth Rocketry Challenge prize. 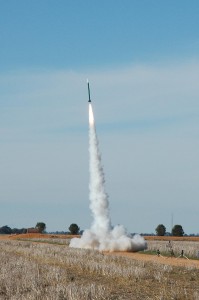 Participants line up for the inaugural AYRC launch 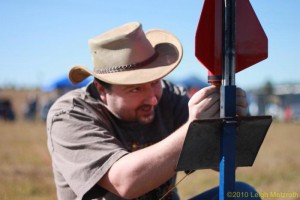 Nic Lottering prepares his rocket for its next launch 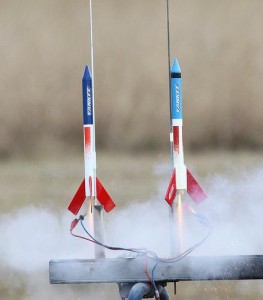 In 2011, the club consolidated its launch program.  Nic Lottering achieved his level 3 HPR certification at the LA2 site (the first to do so in Queensland) with his Sledgehammer rocket.  National Library archived the AYRC publications into Pandora, the National Heritage archives.  Shirley Harmens becomes the first QRS female to achieve her Level 1 and 2 TRA HPR certification.  A new launch controller was designed and constructed.  The Queensland Department of Employment, Economic Development and Innovation conducted an audit on the LA2 site and launch procedures.  A number of improvement opportunities were identified and, over the following six months, subsequently implemented.

During the year, QRS was proud to host Americans BDale Garbee and Keith Packard, the owners of the model rocketry software and hardware manufacturer Altus Metrum. 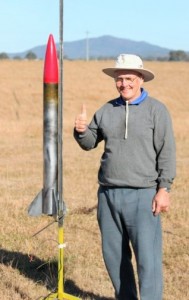 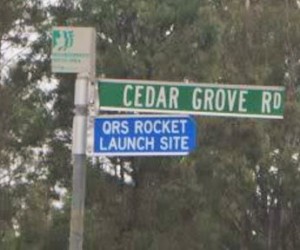 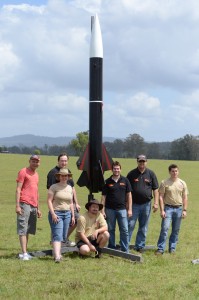 Nic Lottering (and team) with his Sledgehammer

In 2012, QRS celebrated five years as a club.  A mentor scheme was introduced to ensure that beginners were provided guidance by the more experienced benefactors.  A quarterly newsletter was commenced with the theme of providing member communications.  The first of the annual HPR launches at Westmar (about a five hour drive west of Brisbane) commenced.  The launch site is a farmer’s property which provided a vast area of flat ground perfect for the launching and retrieval of rockets especially with a CASA ceiling of 20,000ft.  Ari Piirainen launched his 5m long Oz Area 51 to 10.300ft on an N2000 motor.

During this year, Petar Nikolic and Len Forsyth were awarded life membership.  Ian Voss claimed an unofficial world record when he launched his tiny Frisky Frog rocket to 534 ft. on a small A8 motor.   Membership had risen to 44. 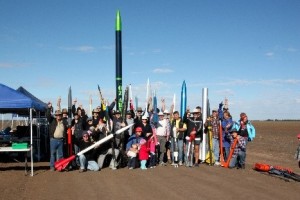 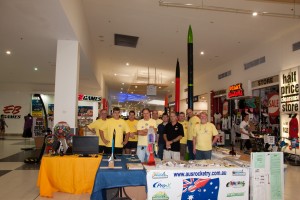 QRS members man the display at the Kuraby Shopping centre

In 2013, the Blast Off development program was introduced providing a pathway for the beginner rocketeer through the array of rocketry information and experience.  Ari Piirainen continued his visits to many schools explaining the wonders of model rocketry and arranging for QRS presence at community fairs.  As a result of a state government audit of QRS procedures, a site survey and pegging of key locations at the launch site was completed and pre-launch induction and RSO checklists were introduced.  A new web page was launched and a new-look club tee shirt was released.  QRS affiliated with the newly formed Australian Model Rocket Society Inc.  Nic Lottering became the first in Australia to launch a rocket with an O motor.  This occurred at the annual Westmar launch.  George Dobson achieved his level 3 HPR certification at the same launch event.  QRS membership had grown to 55. 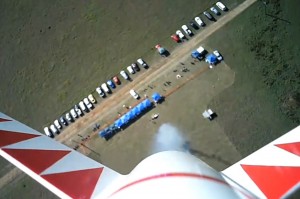 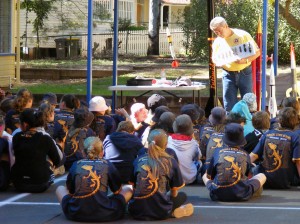 In 2014, the QRS committee introduced a five year strategic plan to assist with the governance of the quickly developing hobby.  New fire equipment was obtained and fire-fighting training for volunteers was completed.  Dean Barnes and Warren McKay achieved their level 3 HPR certification.  Improved launch procedures were developed and implemented as a result of public liability insurer and the land owner requirements.  The best news for the year was being awarded a Gambling Community Benefit Fund grant.  This was used to improve and replace our ageing launch equipment.  The Westmar CASA waiver was increased to 120,000ft.  Celebratory QRS lapel pins were presented to members who had been with the QRS for five or more years.  QRS membership was now at 52. 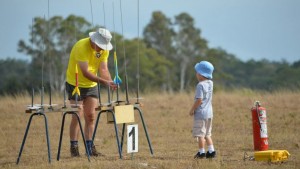 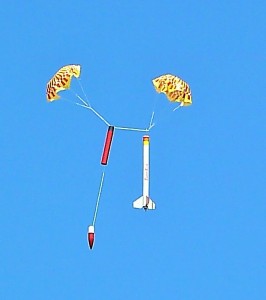 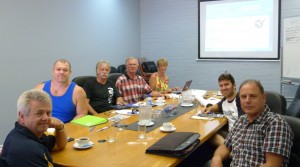 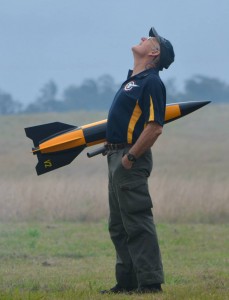 Warren McKay looks to the skies

2015 proved to be the most exciting for QRS since inception.  We were honoured to host the Australian Rocketry Thunda Down Under 2015 (ARTDU 2015) at our Enarra (Westmar) site.  This was undoubtedly the greatest launch program ever conducted in the Southern Hemisphere.  It was a truly international event and attracted many visitors.  During the year, Bruce Symmans, Andrew Surtees, David Bell, Matthew Small, Matt Barton and Jeff Cheales achieved their level 3 HPR certification.  The Christoffel family, Coggan family, LCC councilor Trevina Schwarz and Homer/Linda Hickam were inducted as honorary members of QRS because of their continuous support over the years.  New launch trailer, launch controller, ride-on mower and other equipment were acquired as a result of successful grant applications.  Nic Lottering launched his Mad Max II at ARTDU 2015 to 65,769ft. AGL (attaining Mach 3.52) to set an AMRS height and speed record.  The Fly-it, Take-it program was introduced at advertised launches. 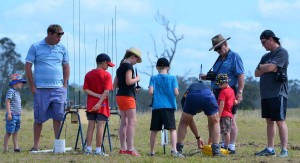 Warren McKay sets up the Fly-it, Take-it program at the October launch

On the evening of Saturday 6 May 2017, The Queensland Rocketry Society hosted a fantastic dinner celebrating 10 years since the formation of the club. Thirty-seven members and guests in attendance to celebrate this great milestone.

Many of the first ten members of the club were present including member numbers 01-(Brian Dixon), 02-(Ryan McDonald), 03-(Ari ‘Rocket-Man’ Piirainen), 06-(Len Forsyth), 08-(Blake Nikolic) and 10-(Simon Liebke). It was a pleasure having Dave Cousens attend from the Western Australian Rocketry Society. Dave is also the chancellor for the Australian Model Rocketry Society and we were very privileged to have him give a speech about national support for the hobby.

Members and guests had an opportunity to socialise whist enjoying a few refreshments and were then seated for a two course meal. Stories about the creation of the club from former president Brian Dixon and presentations were made. 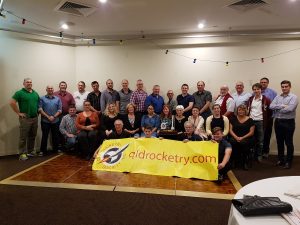 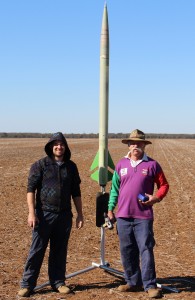