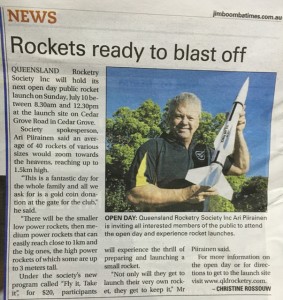 An absolutely magnificent launch day, chilly at first but turning into cloudless warm day with no wind. Probably the busiest public launch day for some time with over 150 visitors thanks to Ari's PR efforts with the local media. These numbers were reflected in the Southern Cross "Fly It, Take It" program with 32 rockets launched. There was an additional 9 Low Power, 13 Medium Power, 14 High Power and 2 water rocket launches making a total for the day of 70 launches. Some members traveled considerable distances to be at the event with Nic Lottering up from NSW and Matthew Small and his partner Kathy down from Cairns.

A couple of more unusual rockets launched were Matthew Smalls "Flying Saucer" on an F30 and Mike Ritters single fin rocket "One Zee" on a F52. Unfortunately Mike ended up in the power lines but it will be retrieved by the power company later this week.

Some of the more unusual rocket names emerging during the mornings launches were Nic's "54 Thingo", Matt's "Dunno", Cam's "Mohammed Ali" but the most amusing was one of the young visitor's who called his rocket "Please Don't Explode".

An event like a public launch requires many volunteers but most can do a couple of hours and still have time to play. However, once again Di Nikolic spent the whole launch running the BBQ/drinks tent, thanks Di. The morning was very successful, enjoyed by everyone and hopefully will result in new members.

A cold and bleak morning with a stiff wind greeted the smaller than normal turn-out of club members. There were 21 launches for the morning: 14 Low Power, 3 Medium Power and 4 High Power. Most flyers opting for lower altitude flights to avoid the inevitable long walk.

The biggest motor of the day was Ole Kirk's Level 2 attempt with his Tomahawk on a J425 which sadly was not successful when the motor case blew out at 1500 feet.

Lachlan Thomas really earned his L1 which he achieved on his Quicksilver on a H143 Smokey Sam. His simmed altitude of 2600 feet was always going to mean a long hike and the rocket drifted about a kilometer landing in the local river. He wasn't about to let this end his attempt so he got his gear off and went swimming. Definitely an L1 "above and beyond" the normal requirements. Congratulations Lachlan!

It was great to several family groups launching together including new family memberships. Despite the average weather conditions, everyone seemed to enjoy themselves with only one rocket being lost to wind drift.