The July launch was an advertised launch.  Before dawn, the westerly winds arrived with a vengeance threatening the program.  However, by the time we commenced, the winds had abated somewhat (although gusting to 20kph) with the temperature of around the 10°C.  We had clear blue skies, perfect for tracking the rockets progress.

An estimated 450 spectators, including Logan City Councillor Trevina Schwartz, attended the launch and braved the cool conditions.  They were entertained by some great launches and kept happy with the sausage sizzle and coffee van.

40 Fly-it, Take-it rockets, donated by Southern Cross Rocketry were snapped up in short time.  The youngsters had a great time launching their newly acquired rockets and went home with a memento of the occasion.

Mark, Bruce, Stewart, Larry, Andrew and Jeff launched HPR rockets up to K power to entertain the crowd.  Larry launched of his Dominator 4 on a K675 sparky to 4,500ft.  It was loud and pyro-technic at launch but had a harder than normal landing when the main parachute didn’t fully deploy.

For the weirdest launch of the day, Andrew launched his modified Badminton bird called Low Orbit Shuttle with an A10.

Longest walk of the day went to Jack with his Herf AMRAAM 2.  After a perfect launch to 1,800ft, they wind caught it and it drifted off over the Eastern horizon.  After some ingenious navigation, the rocket was located and returned to the stable.

Adam achieved his level 1 certification with his Callisto.  Congratulations, Adam. 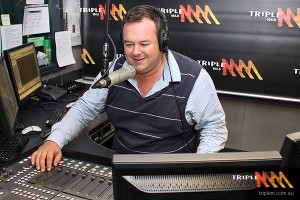