Considering the weather we have had over the last few weeks, we were indeed extremely lucky to be able to have a great launch with some dark clouds turning up around 10.15am but no rain....and those clouds moved away to allow us to continue launching.This was a public open day launch.  The usual media advertising for such events had been initiated but the uncertain weather in the preceding days was going to be a factor in determining how successful it would be.  We were pleasantly surprised to see that around 350-400 people attending.  They were entertained with thirty four rockets launched.

We were honored having our own Nic Lottering visiting us and bringing his awesome 3.5metre Sledgehammer for a cool flight.  This sure was a huge crowd pleaser with the noise of the public nearly drowning out sound of the M3500R motor. It was a perfect launch but sadly the recovery parachute guided it to a tree on the riverbank where it hung high and dry.  Plans are on a way to recover it though. Very special thank's to Nic for availing himself and his special rocket for the entertainment of the appreciative crowd.

Another special guest was David Bell from NSW who launched his 1/4 scale Patriot.  This was a level 2 certification flight.  The flight was text book perfect with 'Skidmark' motor which got the crowd going. The recovery trip was a long one but no doubt David was a 'happy chappy' to make that walk.  Congratulations to David for a successful flight and achievng his certification.

Ari launched the ever-reliable Ariel using J420R motor.  Sadly, the rocket drifted a considerable distance under parachute and Ari was unable to find it even after two attempts walking through the soggy conditions.  The farmer has been notified. Maybe he will find it during the course of his farm duties and it will ultimately be returned to it's owner.

Many cool flights took to the skies during the morning and crowd loved every minute of it.  We even had a rocket that had been produced using a 3D printer.  It had a safe but fairly unstable flight.  More work needs to be done on the design.

Big thank's must go to all volunteers who helped during the morning.  Without their help, events like this would not happen - so thank you indeed. 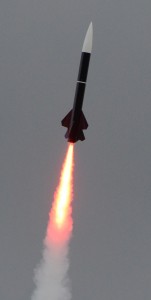 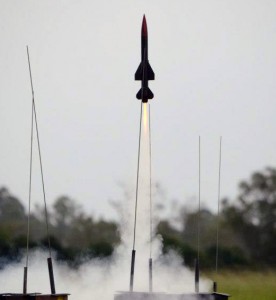 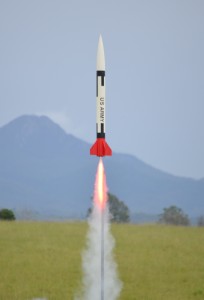