Adam Cox from Totally Wild visits QRS at Cedar Grove to watch Ari's Intimidator 4 take to the skies. Unfortunately Pip Russell couldn't make it out this time, but Adam sure had a 'blast'

After the range was officially opened, a dozen teams started preparation for the first round of flights. Having only flown the smaller A and B size motors, there were plenty of questions from contestants and involvement from the AYRC officials to make sure flight deadlines were met and range procedures were adhered to.

The judges were ready for what was to be a very exciting and interesting challenge. With a maximum score of 240points available per team, the contestants had to not only build a rocket that would fly with stability and deploy recovery devices correctly, but also had to have great aesthetics.
The first round saw many characteristics which were unknown to some contestants as the power of higher impulse motors quickly destroyed shock cords, fins and nose cones. This meant that the lessons learned in the lead up to the event had to be quickly implemented with onsite repairs to those who had received the unpredicted outcomes of their first round flight. With those repairs and modifications made, round two saw some very big improvements and showed that with the right tools and mind set, the contestants had successfully learnt many aspects/characteristics of rocketry in a very short time.
Ultimately there had to be one winner and a big congratulations goes to the Beauy Beasts from Beaudesert State Primary School who took out first place by only 3 points. Second place was Nocturnal from Springwood State High School and third was the Beauy Beauties from Beaudesert State Primary School.
Throughout the day there were a number of demonstration flights starting from mid power E and G motors up to Level 1 and Level 2 high power I and J motors. There was also a flight of the Cool Spool (electrical reel) and a toob’oh on a D21. These demonstrations showed how the thrust curve on motors is exponential as the impulse range increases and that with enough power you can basically make anything fly. Apart from the scientific benefits of these demonstrations, I never get tired of seeing and hearing the ‘Wow factor’ amongst the crowd.
The purpose of the AYRC was to help educate school aged students using all the factors involved with launching a model rocket, including theoretical and practical use of mathematics, physics, history, aerodynamics and more. I believe those aspects were well captured by students and there are already plans to increase the skill set of contestants with advancements in the challenge requirements for next year.
I would like to personally thank everyone involved in the inaugural Australian Youth Rocketry Challenge. From the AYRC officials and sponsors, to the contestants, teachers and parents, this event couldn’t have been as successful as it was without the support and participation of everyone involved. I must also put a big thank you out to Petar and Ari who went that extra mile to make this event happen.
With the response from this year, 2011 plans to be bigger and better with the rules already being produced. We will have next years invitations out soon and look forward to our interstate competitors joining us.
Catch you all in 2011!

Fact is that rockets were still launched and we ended up having a sausage sizzle beside the main road and for "non event" still had around 100+ people there.  Scoop said "I came here to launch rockets" so he did and it was brilliant to see big Thor rip into the heavens on M power thus he has the bragging rights now for a first M launched at our launch site ! Thank's Scoop. Local councilors attended and were treated to M power and they were "blown away" + totally impressed. It was just after mid day when I left the launch site and Scoop, Mike and Wayne were still prepping to launch few more. The sad news is that Mike's stunning Thor is lost in action and also Wayne's Mongoose ! The launch is officially postponed till next Sunday. The set up will be done in the morning of the launch so all help will be much appreciated from 6am onwards. Thank's to Bruce for helping with "deliveries" with his 4x4 and all who assisted.

My stay was even further limited by wife being hospitalized on Friday and after nearly 2 day's finally diagnosed that the appendix has to come out. During this time she was in severe pain with morphine given to her in regular bases. So, while I was at launch with Montana, she was operated on. Thank's guys for all your caring thoughts and she is all ok.I got to see few great flights before I left and congrats indeed to Damian for his L1 and Alex had a great flight also. Nice to see Robert back, welcome mate.  I had a change to talk to few new people and one is a definite new member. As I headed out, earlier than I have ever done before, I looked back from the hill down towards the launch area and even though this was "members only launch" thus not advertised, it was so good to see the amount of cars there. Must have been around 100 people easily.

The crowd started to build up slowly at first then more and more. Most likely the largest crowd this year so far at around 400+ people. They got so see around 60 rockets being launched of all shapes and sizes.Congratulations to Wayne for doing a great launch for his L2 with Raptor using J350 power. He then decided to follow it up with another J powered flight which went perfect as well. Well done. Blake's and Alex's combined overnight creation which was a tube rocket did a great flight amongst so many others !!Big thank's to Brian and Len for the duties performed and to all who helped to pack up after the event. I was real happy to see many young people coming to offer help, that's fantastic.

We had a another brilliant launch today on the 16th May.  Overnight, light cloud cover enveloped the skies and kept the temperatures cool all day  Launching got off to fairly slow start, but boy, did it pick up as the day progressed.  There was basically no wind, which was great.

Even though this was a non-advertised launch event, we had a healthy crowd of around 100 there.  It's brilliant to see so many new members launching their rockets and having a blast doing it.  Also, 3 new people got their application forms and that's allways a good thing.

Many, many great flights took to the skies but there is lack of photos now as our resident photographer.

Cart and I both managed a special misfortune of hanging our rockets on to the power lines, one after the other.

Last but not least, thank you to everyone who helped with the set-up and packing-up.  Without those volunteers, no one flies. Thank you to all QRS members who attended.  Without you there wouldn't be this fantastic club around.  It was a good day of rocketry.  The rocket motor count was as follows:

To our interstate friends and those who couldn't be there: After 4 month campaign to local councillor and Logan City Council, I'm very proud to announce that QRS now has a permanent directional sign at the intersection of the Mount Lindsay Highway and Cedar Grove Road.  I think that is pretty cool.

The group was smallest we have spoken to, only 16 students but all are studying aerospace so it was right up their alley. You could see the interest in the young mens eyes as I spoke to them about this awesome hobby. I have no doubt that there will be few wanting to get into the hobby. We ended up launching the 'ol Patriot which went perfectly as possible, landing just few meters from the launch pad.There was few questions that we answered to the best of our ability.It was nice to see the principal there listening too and seemed genuinely interested asking many questions himself. Actually the funny thing is that towards the end he told my wife he "better get back to work" and then appearing back in few minutes !! It shows what was more interesting. Also the deputy principal turned up and others. Thank's to Bruce who spoke to them at length. I had a head cold and and voice started to give up so that was much appreciated mate.

Rocket cafe was a huge success and really helped take the load off the members. Also, a huge thanks to the guys that helped out at the gate, also to those that helped with the usual duties of LCO, RSO, setup and dismantling.

Also, the channel 10 crew were out to record a few more segments to be shown later on this year. A huge congratulations to Rob and Austin for being the star Father and Son team to get your 5 minutes of fame!

We had 39 launches, with the below motor impulses.

Also, a couple of the guys have purchased MD80 cameras. Check out these videos they have posted;

Lets look forward to a much dryer launch next month!!! 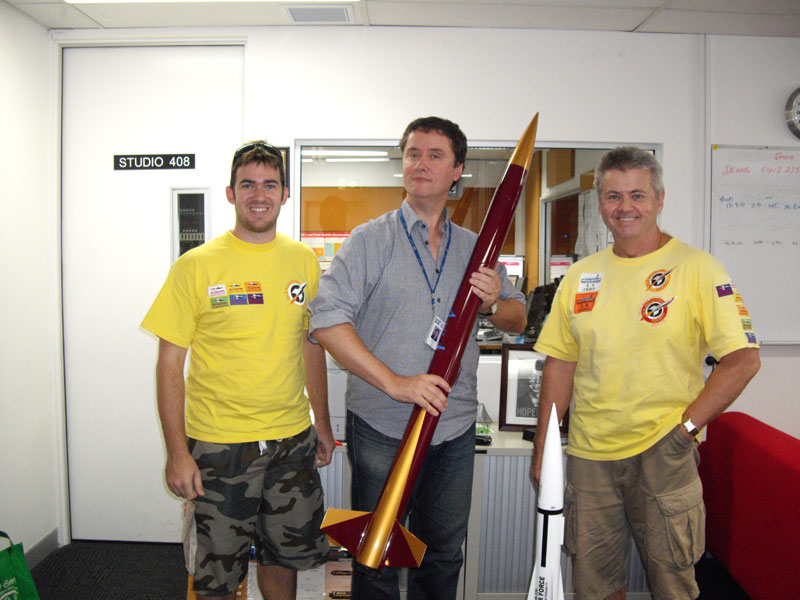 Ari Piirainen and Blake Nikolic join Richard Fidler in the studio to talk about rocketry and to promote the 14 March 2010 public launch and the inaugural Australian Youth Rocketry Challenge.